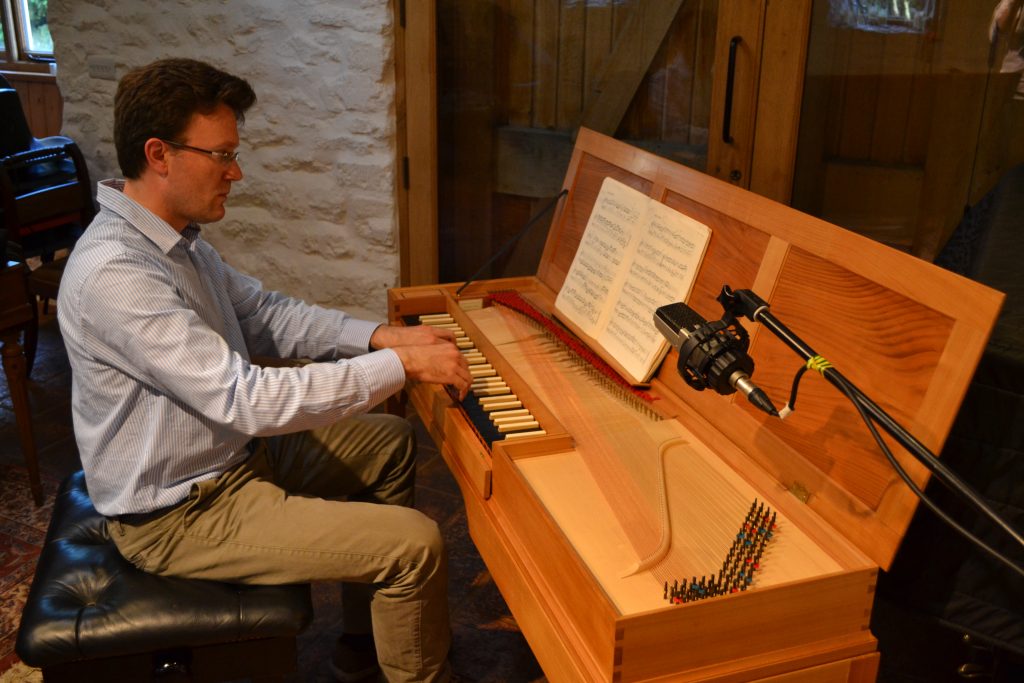 Stephen and Cherry Large allowed me the great honour of recording J. S. Bach’s French Suites in Sophie’s Barn from June 20th to 23rd 2015. Moreover, they welcomed the sound engineer Adam Binks, the keyboard technician Oliver Sändig and myself into their lovely home and seemed remarkably relaxed when confronted with our unexpected request to use their hallway as a control room. Not only did these arrangements give us a mere ten-second commute to work, they gave us the freedom to record on one occasion until 2.00am.

In addition to the splendid hospitality, there were two reasons to record in Sophie’s Barn: it is in a beautifully tranquil location and its size is ideally suited to the two clavichords on which I was performing. The clavichord was a very popular domestic instrument throughout the Baroque and Classical eras, and is even said to have been Bach’s favourite type of keyboard. It is much quieter than the harpsichord or piano, so I was looking for an intimate yet spacious (though non-churchy) acoustic in which the clavichord’s subtle tones could bloom. Sophie’s Barn provided the perfect ambience.

Apart from eating our muffins, our hosts’ cuddly pets were models of restraint. Not a single bark intruded on the sessions, and mercifully the cats didn’t leap into the clavichords! Being in an Arcadian oasis, it was inevitable that there were occasional disturbances from neighbouring gardens, but goodwill exuded from all quarters and any enforced breaks gave us the welcome excuse to gossip round the Aga and eat cake.

The recording was released on Resonus Classics in 2016 and has been described as ‘music making of the highest order’ by the Boston Clavichord Society in the USA. We hope that this disc helps draw attention to the truly meaningful support given to musicians through Sophie’s Silver Lining Fund.

Julian Perkins in Sophie’s Barn. The clavichord pictured here has a case in cherry wood and is one of two instruments used for this recording. It was made in London by Peter Bavington in 2008 and is based on an eighteenth-century German instrument  by Johann Jacob Bodechtel.